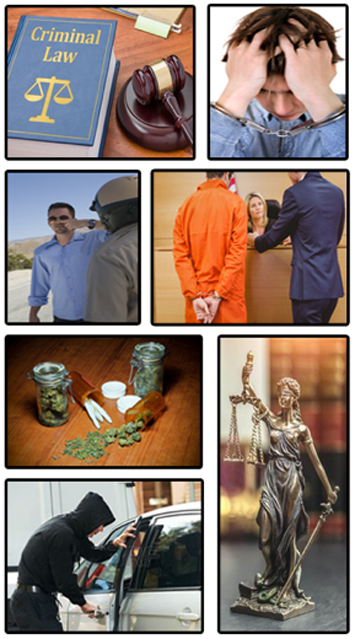 DUI – DRIVING UNDER INFLUENCE
A felony DUI charge can (and will) lead to jail time, heavy fines, restricted driving privileges or have a locking device attached to your vehicle. In fact, a felony DUI conviction will result in jail sentence. Felony DUI charges include any instance in which an impaired driver injures another driver and/or passenger. This includes Vehicular Manslaughter. A major felony DUI could lead to years in prison and a revoking of driving privileges. A person may also be charged with a felony DUI if he/she has had prior DUI convictions within a certain period of time.

TRAFFIC VIOLATIONS
Certain violation convictions can lead to a driver’s license suspension or revocation, regardless of the amount of points you have on your record. Understanding traffic ticket convictions can also help you understand the importance of having good legal representation in your traffic ticket fight.

DRUG CASES
If you have been charged with possession and or trafficking of marijuana, you should consult a criminal defense attorney immediately. Although marijuana related crimes are not punished as severely as those involving controlled substances, any kind of criminal record has a serious impact on your future.

ARREST WARRANT
A warrant gives law enforcement officers authority to arrest the individual named; it also instructs the arresting officer to bring the person before the court. While the requesting law enforcement officer usually seeks to immediately arrest the person, the warrant is also recorded in the state’s computer databases, which informs all law enforcement officers that an outstanding warrant exists. Sometimes, a warrant for a misdemeanor crime will also list a bail or bond amount, which can be posted to obtain that person’s immediate release. In some states, however, rarely do courts put a cash bail bond amount on felony warrants. When a person is picked up on an outstanding felony warrant they cannot normally be released until they can be brought to court to see a judge, and have a bond set, which would either be a cash or a signature bond.

ASSAULT AND BATTERY
At AV Law, we defend our clients against felony assault charges, including assault and battery, vehicular assault, assault with a deadly weapon, assaulting a police officer and other charges. Assault charges can lead to heavy jail time, heavy fines, long probationary periods and more.

DOMESTIC VIOLENCE
Anyone charged with a domestic violence-related crime should consult with an experienced criminal defense attorney right away, as mere allegations can be enough to compromise a person’s reputation, employment, and personal relationships. Even worse, conviction of a crime related to domestic violence can result in jail time, fines, probation, or an order to attend counseling or anger management classes.

ROBBERY AND THEFT
Robbery is theft using force, intimidation, or the threat of force to do it. You can be charged and convicted with robbery with a deadly weapon, even if the gun you are using is not real. The only thing the court cares about is if the person you aimed the gun at thought it was real, and acted accordingly.

PROSTITUTION AND SEXUAL ASSAULT
When someone is charged with an offense related to prostitution or sexual assault, they should hire a criminal defense attorney right away, as a conviction can result in heavy fines, prison, job loss and registration as a sex offender.

GET SOCIAL WITH US